The Window Industry Is Getting Smaller In A Lot Of Areas

Insight Data have just published their 2017 window and door industry report, and despite comments to the contrary, there are some pretty important revelations and details within the report if you look closely enough at it.

To take a look at the report yourself, you can download the full thing by following this link: https://www.insightdata.co.uk/reports/ you can also get the three previous industry reports there too.

One of my biggest takes from the report is that in the fabrication world, there are many parts of it that are actually getting smaller, and in areas where we were perhaps guilty of thinking it would be in expansion for a lot longer.

I think one of the standout charts within the report is the drastic reduction in the number of PVCu window and door fabricators from 2008 to 2017. Nine years ago of course we were well into the depths of the Great Recession. During harsh economic times you would expect company numbers to fall as part of that cycle naturally anyway. But as the industry diversified and home owners sought new product options, numbers never recovered and have been sliding ever since: 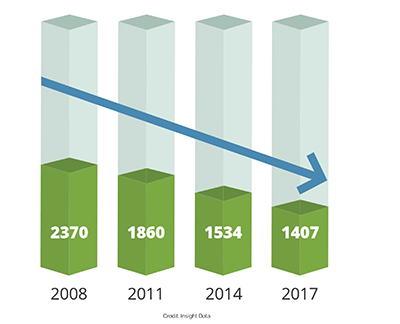 The industry has lost nearly 1000 PVCu fabricators in nine years. That is an incredibly sharp correction, although many will argue that there was a huge amount of overcapacity in this part of the industry and that many had to go as there were far too many companies to go around to service the levels of business out there.

A change in buying patterns also has had a big part to play in this. Residential aluminium has been storming back, with many more installers taking up the product, and that will have naturally eaten away into the market share of PVCu in the residential sector.

Speaking of aluminium, you would be forgiven for thinking that due to the sharp increase in it’s popularity would lead to rising numbers of aluminium fabricators…

The latest Insight Data report would seem to suggest that aluminium fabricator growth is starting to level off: 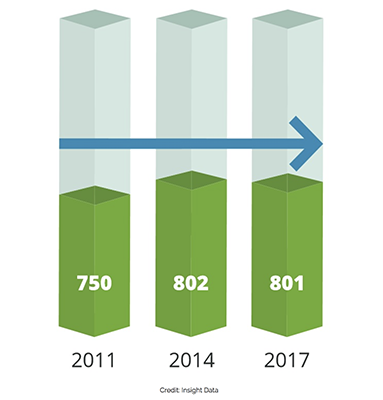 The 2017 report though appears to show a slow of the that growth to remaining flat. That’s not to say that an increasing number of installers aren’t selling aluminium, they are if you read the report in full. But it is an indication that perhaps the number of aluminium fabricators has reached a level that can now sustain the demand out there. I would say that any more aluminium fabricators than this would risk a PVCu-style scenario where this part of the market is over-inflated.

It looks like the industry has been doing some serious downsizing over the past few years. On reflection, that is probably right. We are all fairly aware that there is a slowdown approaching, and I think that given the slowing demand from the general public, these figures reflect that to some degree.

I think what these figures also shows is that in some parts of our market, the products that were once considered to be booming are perhaps starting to reach their peaks. Take the composite door fabricator numbers for example. I don’t think many of us would have predicted that numbers would have started to fall by now. But they have. That doesn’t mean that demand for composite doors from the public is going to wane. Rather, the industry has enough composite door manufacturers out there to service the current levels of demand. The question then turns to the battle between the fabricators that are left for what is still a growing market.

The same goes for the aluminium sector. Demand from home owners continues to rise and looks set to for a while. The new numbers indicate that there is now enough fabricators to service that demand. The fight is now for market share between the manufacturers and who can thrive and who will fall by the wayside.

All in all though, these numbers paint a picture that shows fabrication in major decline in many areas. As we head into this predicted slowdown, future reports may well show these numbers shrinking even further.