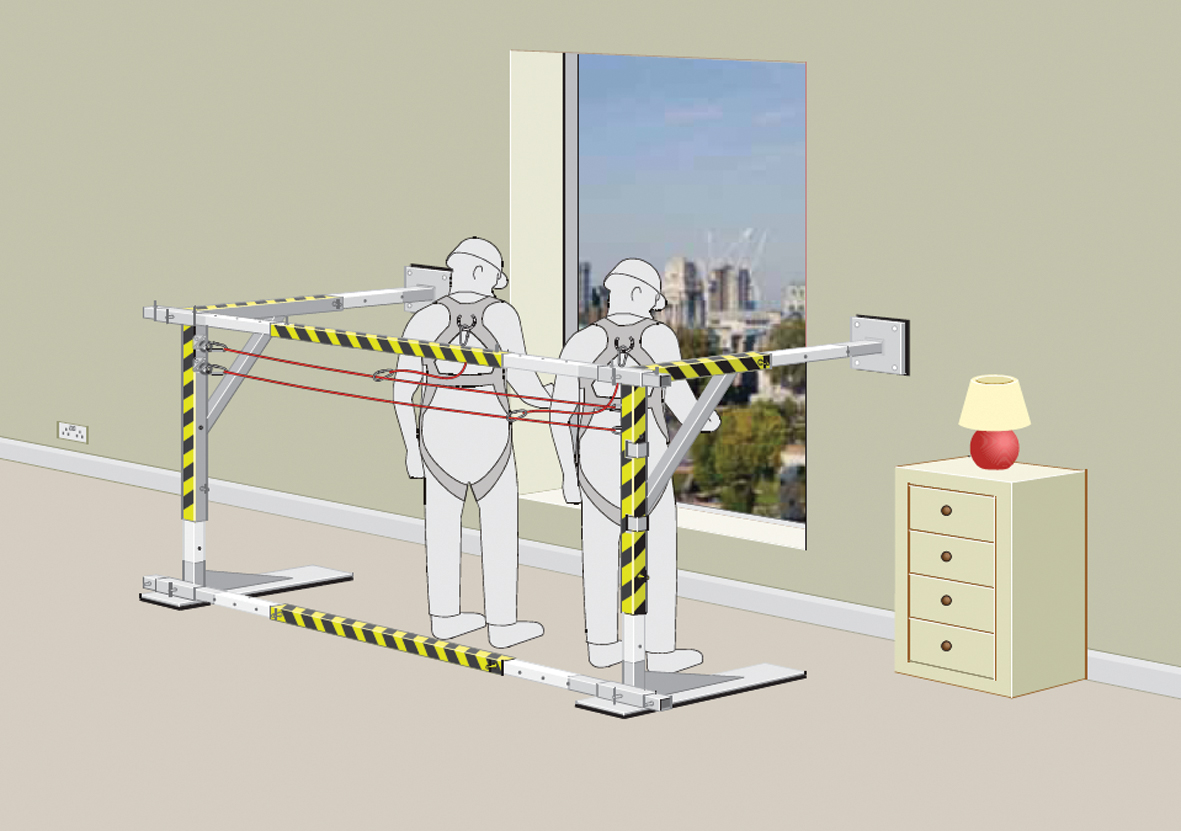 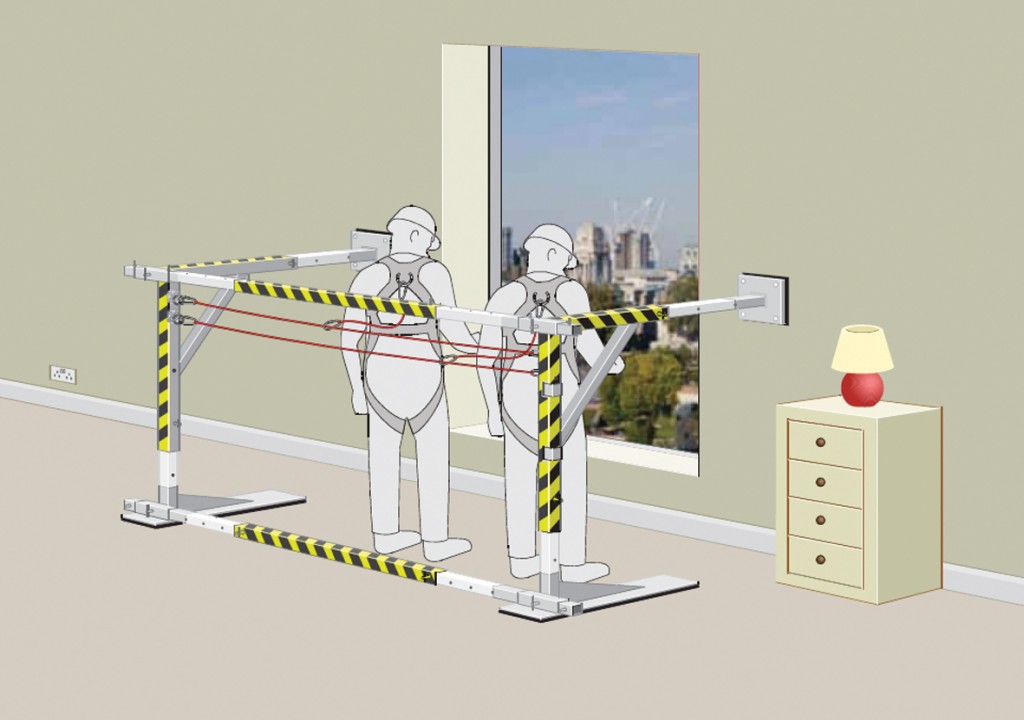 The Stronghold is a fast erect fall restraint and barrier system which is setup inside the building, around an opening to be worked on.

The Stronghold instantly provides a highly visible barrier around the window or other type of opening at height, preventing the public or other trades people from getting close enough to the opening to fall. Secondly the Stronghold provides anchor points for two fitters to attach their harnesses to, protecting them from a fall. The Stronghold also has an extra set of anchor plates that are used to anchor a window frame or other object to the Stronghold via load straps whilst the frame or object is lifted into position and secured.

The Stronghold can be setup on the inside of the building, around an opening at height in under 5 minutes.

It is free standing and does not require any fixing meaning that no damage is caused to the walls or floor (holes are available in the wall plates in case you prefer to fix the Stronghold to the wall making the Stronghold semi permanent for an ongoing job).

The Stronghold provides a highly visible barrier around the opening preventing other trades people or the public from getting close enough to the hazard to fall. It also provides anchor points for two workers to attach to, protecting them both from a fall. The Stronghold also has extra anchor points that are used to connect two loads straps to. These loads straps can be used to anchor an object such as a window frame during installation.

The Stronghold weighs little over 25Kg but has passed the British Standard EN 795 B :2012 where it was required to support 1.3T. It did so without any signs of deformity.

The Stronghold is fully adjustable to 1.6m in depth from the wall to pass over objects such as baths or work tops, to 2m in height from the floor level to allow a user to work on a hop up on over an obstacle and in width to 4m.

The Stronghold Fall Restraint is available in a RIGID version and also a FOLD AWAY version. Each side unit of the Fold Away version folds down to approximately 1500mm x 150mm x 300mm weighing little over 11Kg per side unit.

The Stronghold is a product protected by Patent and the name ‘Stronghold’ is also a registered Trade Mark.

The Stronghold was designed in response to a number of industry specialist’s requests for something to solve the issues of working around a vertical opening without using scaffold and obstructive systems (like a window bar).

The Stronghold was initially designed for the glazing industry but as a result of hearing Mrs Deeney who gave a touching talk on the famous death of her husband, Mr Deeney who tragically fell through a damaged board whilst working in a lift shaft, the Stronghold was quickly redesigned to work on lift shafts too.

The Stronghold has come at a time where there have been a number of injuries and deaths as a result of a fall from a height that could have been avoided by the use of the Stronghold, (recently April 2013 Scotland).

The Stronghold has been developed by myself working closely with Andy Hunter the H&S Manager for Everest and Chairman of the GGF Health and Safety Committee, who was previously H&S manager at Crystal Windows in Romford Essex.

His passion for his job and the safety of the people he is in a position to try to protect drove him to help get the Stronghold to where it is now. With a joint wish that the Stronghold’s will be used and will reduce injuries or worse, for the industry.

The Stronghold is being trialed by Everest who saved £300 on scaffold for their first trial which was a 3 sided bay, first floor installation. Their workers were kept safe, allowing complete work from the inside without external access equipment.

The installer said that ‘the harness system was one of the most comfortable he has used’.

The trial will prove the value of the Stronghold to Everest who could save a small fortune on scaffold for years to come if they operate on installations above ground floor using the Stronghold. 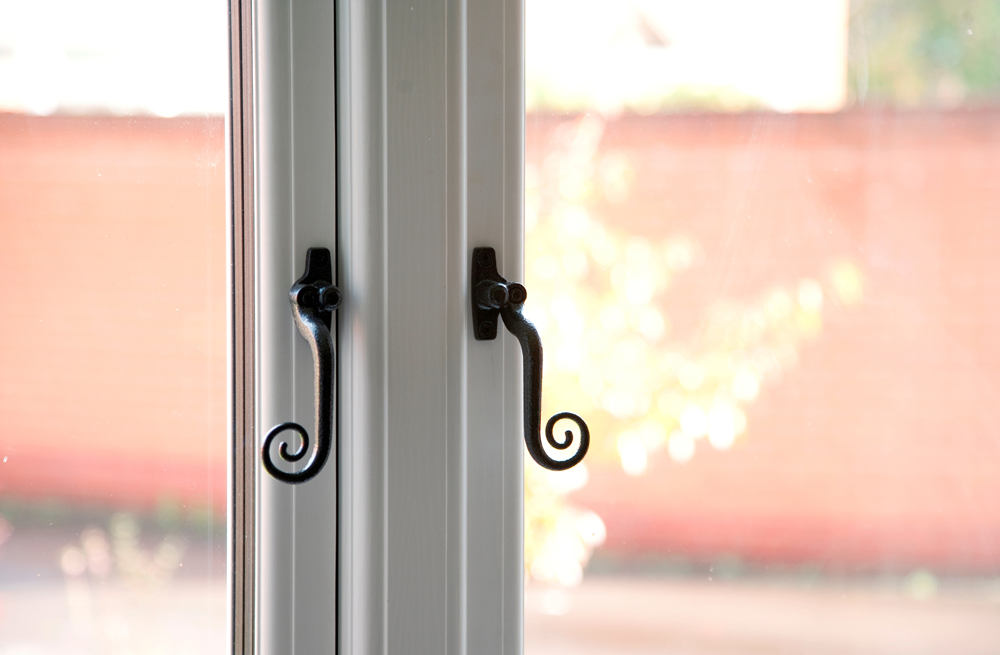 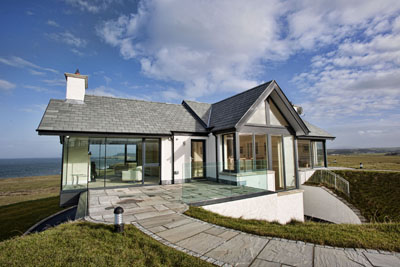 THE NUMBER ONE CHOICE 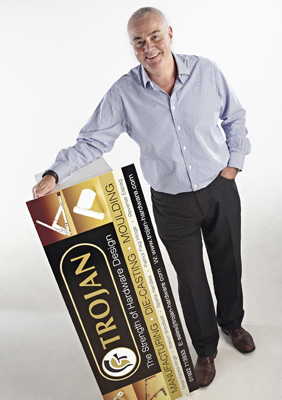 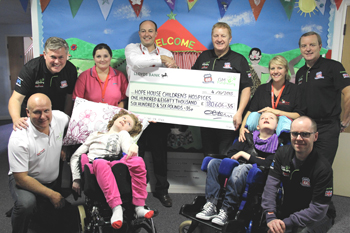